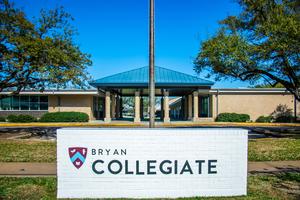 Success was in the air even more than usual at Bryan Collegiate High School this week. U.S. News & World Report recognized the early college high school in its “Best” High School national rankings Tuesday for the seventh straight year and it achieved a 2019 College Success Award from GreatSchools.

Less than 40 percent of schools ranked by the publication earned the honor of being called one of its “Best High Schools.”

This year’s rankings include national rankings of 17,000 schools, along with charter, magnet, STEM and state rankings.

Bryan Collegiate is one of only 20 percent of total eligible schools across twenty-five states that won this year's GreatSchools College Success award. GreatSchools said its College Success Award, “recognizes and celebrates public high schools that do a great job preparing graduating seniors for postsecondary success.”

Bryan Collegiate Principal Tommy Roberts is thankful for the honors and what it means to be nationally ranked by multiple publications.

"To be recognized by two organizations in the same week as one of the nation’s best high schools is amazing,” Roberts said. “Our staff is focused on student success every day, and it’s great to see that their hard work has paid off.”