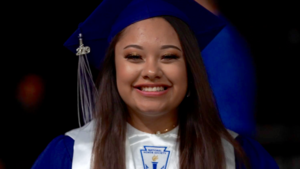 Erendida Urbano, Bryan ISD’s most recent “I Am Bryan ISD” honoree, is serving in the U.S. Navy and plans to earn a degree in nuclear engineering.

The enlistee is no stranger to having a lot on her plate. Before graduating among the top ten percent at Bryan High in May, Urbano served in the student council as student body president. She also served as a member in the National Honor Society, Key Club, Ballet Folklórico, cheerleading and a tutor for migrant students.

Additionally, Urbano graduated as an International Baccalaureate (IB) student. The internationally recognized program requires a dedication to time management. Something Urbano accomplished through a planner, lots of different colored highlighters and an ever-evolving list.

“The more I scratch off my list, the more accomplished I feel,” Urbano said. “So I add on as much as I can.”

IB is a two-year program recognized at universities around the world. Only 2.5 percent of U.S. high schools have the program, and Bryan High now has a preparatory track to prepare for it.

“When you first start IB it’s like a bang,” Urbano said. “I was like, ‘Oh my goodness. What did I get myself into?’ But now that Bryan High School has the Pre-IB program, you can work your way into it and learn step by step.”

When the stress associated with a full schedule was too much for Urbano, she responded by reading, running, or talking to family and friends. She said that IB prepared her academically and expanded her horizons through service to her community.

In joining the Navy, Urbano is following in the footsteps of a cousin who recommended the path. The cousins share a passion for serving others.

“So many people have lost their lives fighting for my freedom,” Urbano said. “So I want to give back to them. I want to serve this country with my honor and my courage because it’s given me so many opportunities that I will never be able to pay back.”

Her pursuit of a nuclear engineering degree is also born out of a desire to give back to her community by working toward renewable energy solutions.