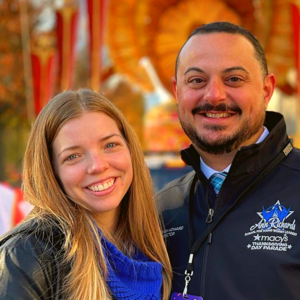 A veteran music educator with extensive experience leading award winning high school bands is heading to Rudder High School to serve as the next head director of the Ranger Band.

Stephen Howard comes to Rudder High School from the Ann Richards School for Young Women Leaders in Austin, were he directed the only all-female competitive ensemble in the nation, winning Bands of America (BOA) Regional Class Champion five times.

While at Ann Richards, and before that as associate band director at James Bowie High School in Austin, Howard’s ensembles captured national attention representing Texas in the Macy’s Thanksgiving Day Parade in New York City.

"I am incredibly excited to get to know the Rudder Ranger family,” Howard said. “I am looking forward to working with the students, faculty, admin, and the Bryan community to build upon their history of excellence and, with their support, continue to grow and develop a program that makes Rudder High School stand out!"

About the Hire
Stephen A. Howard has more than 15 years experience leading high school bands, serving as the associate director of bands at James Bowie high School in Austin ISD from 2007 until 2014. While at Bowie, the school’s outdoor performing ensemble appeared in the Macy’s Thanksgiving Day Parade in 2008, UIL State Marching Contest Finals in 2008, 2010, and 2012, and BOA Grand National Finals in 2009 and 2012. They earned the prestigious John Philip Sousa Foundation Sudler Shield for excellence in marching band in 2013. Concert bands under his direction also consistently earned high ratings.

While at Bowie, Howard also grew the color guard program, including leading the winter guard teams to their first appearance in the Winter Guard International (WGI) Scholastic Open Class Finals in 2014.

In the fall of 2014, Howard took over as director of bands at the Ann Richards School for Young Women Leaders, a school of choice that serves grades 6-12 in Austin ISD. Under his direction, the band program tripled in size. The Marching Stars are a five-time BOA Regional Class Champion. They are the only all-female competitive marching band in the nation. The Ann Richards Color Guard was named the 2017 TCGC Novice Class Champions, the 2018 TCGC Scholastic Regional A State Bronze Medalists, and the 2019 TCGC Scholastic AA State Silver Medalist.

Stephen is married to Hannah Howard, a Bryan High School graduate, and they have two children, Aria and Andrew.