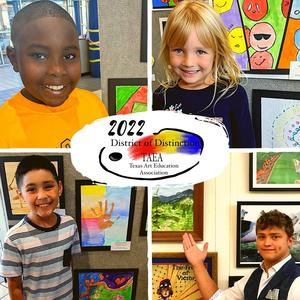 The Texas Art Education Association is awarding Bryan ISD.
For the third consecutive year, Bryan ISD has been named a "District of Distinction" by the Texas Art Education Association!
Only 59 out of 1,200 districts in Texas earned the honor. That means Bryan ISD is among the top 4% districts in the state in art education.
TAEA, the largest state professional organization for art educators in the United States, awards school districts that "lead the way" in visual arts.
Bryan ISD will be honored for its continued fine arts success at the Nov. 10 TAEA Fall Conference General Assembly.
Learn About Other Recent Recognitions:
http://bryanisd.org/apps/pages/index.jsp?uREC_ID=1554928...
Published September 19, 2022 Print