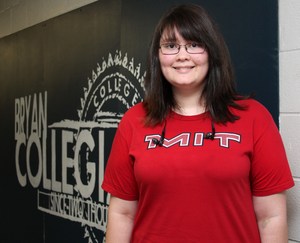 When Kelsey Glover and her mother moved to Bryan four years ago, they didn’t have the Massachusetts Institute of Technology in mind. Instead, Glover was focused on the educational opportunities Bryan Collegiate High School could offer.

Founded in 2007 on a unique partnership between Bryan ISD and Blinn College, Bryan Collegiate guides its students to a high school diploma while simultaneously allowing them the opportunity to earn 40-60 hours of college credit they can apply toward associate and bachelor’s degrees. This year, Bryan Collegiate students earned scholarships totaling close to $3 million.

Blinn instructors travel to the high school campus to teach freshmen and sophomores, while juniors and seniors take their courses on Blinn’s Bryan campus. Seniors take just one class at Bryan Collegiate, while the remainder of their schedule consists of Blinn coursework.

It proved to be the perfect environment to help Glover reach new heights – and impress the MIT admissions team.

“Every single one of the teachers here at Bryan Collegiate have helped me get where I am now,” Glover said. “Anything I’ve ever needed, my teachers have gone out of their way to provide. It’s an amazing community.”

Glover applied to Texas A&M University and the University of Texas, knowing her superb academic standing, first in her class of 51 students, would make her an automatic admit to both schools. She also applied to MIT, though she was skeptical she would be selected.

On March 14, MIT released the list of its 2017 freshman class. Glover was so nervous, she had her mom scan the list for her name.

And there it was.

“The principal (Christina Richardson) and all the teachers I have relationships with are really happy,” Glover said. “I still feel like this isn’t really happening.”

In August, Glover will head for Cambridge, Massachusetts and settle into her new campus dormitory to officially become the first Bryan Collegiate student to attend MIT. She has until the end of her freshman year at MIT to declare a major, but has an inkling she will select brain and cognitive sciences.

“It would be neat to contribute to a cure for Alzheimer’s disease,” Glover said. “There are people in my family affected by it.”

Glover said taking classes on the Blinn-Bryan campus has prepared her for college life and she looks forward to becoming part of MIT’s tight-knit student community.

“They have a lot of support systems I haven’t seen at other schools,” Glover said, referring to MIT’s learning communities and highly-regarded mental health resources that help students adjust to college life and rigorous coursework.  “I’m nervous and excited. I think Blinn and Bryan Collegiate have done a great job preparing me, and I know I’ll find my way once I’m there.”