DISTRICT OF INNOVATION RENEWAL IN 2021
The Bryan ISD District of Innovation plan was initially approved by the Texas Education Agency (TEA) in 2017.

Bryan ISD remains committed to meeting the needs of every student while supporting the staff. Therefore, it was determined that the increased flexibility and opportunities afforded by the District of Innovation status was imperative to maintain. Consequently, the original members of the Local Innovation Committee and replacements as applicable were convened in January 2021 to review the Local Innovation Plan to consider the renewal process. It was determined that the plan would be renewed “as is” with the exception of updating the plan to include current Board Goals, Guiding Principles, and changing the language for the Class Size and Student Teacher Ratios (K-4) specific to the kindergarten pilot at Crockett Elementary. The committee agreed that while the class size statutory exemption was not currently in use, the District would maintain this waiver in the event it may be used in the future. Further, the committee agreed that the plan would not specifically state Crockett Elementary to allow for the possibility of the pilot type program to occur at a different campus.

The Bryan ISD District of Innovation Plan Renewal was approved by the District Educational Improvement Committee on Thursday, March 11, 2021, and the Bryan ISD Board of Trustees on Monday, March 29, 2021.  Next, the plan will go to the Texas Education Agency.

Passed in the 84th Legislative Session, House Bill 1842 allows school districts the opportunity to build flexibility into their operations and planning processes, including certain exemptions from provisions of the Texas Education Code.

On November 7, 2016, the Bryan ISD Board of Trustees unanimously passed a Resolution to Adopt a District of Innovation (DOI). On November 10, 2016, Bryan ISD’s District Educational Improvement Committee (DEIC) was given a presentation about the opportunities presented by being designated as a DOI district. A public hearing was conducted at a Board of Trustees meeting December 5, 2016. The board and our community were both favorable to the concept of Bryan ISD becoming a DOI.

Receiving favorable reviews from teachers, parents, board members, stakeholders and staff, details about the District becoming a DOI were again presented to the Board of Trustees on December 19, 2016, along with a slate of potential DOI Committee Members. The board unanimously approved the committee and gave it the charge to guide and create the plan. The committee was comprised of more than 50 high caliber individuals, predominantly teachers, who represented more than half of the participants.

A teacher from each Bryan ISD school along with representatives from the Board of Trustees, DEIC, District Leadership Team, Parents, Community Members and Staff offered a broad representation of viewpoints.

Representatives from Blinn College, our partners in Bryan Collegiate High School, participated, along with city leaders, realtors and other involved community partners.

The committee met intensively over the course of two months, gathering ideas and coming to consensus on the components for Bryan ISD’s DOI Plan, which is available at the first link below. 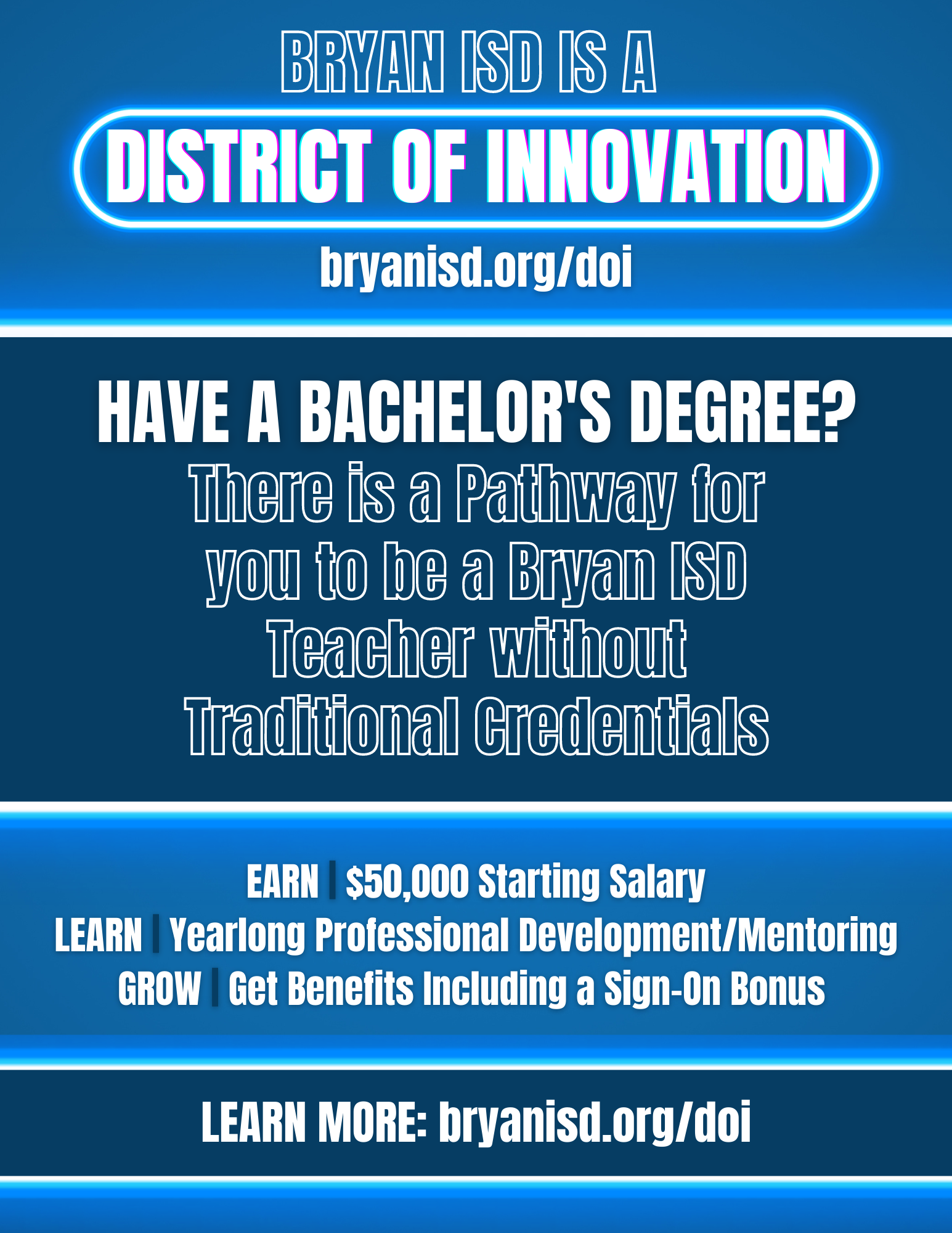